If only she'd mentioned Chopin just once

My mother was a fascinating woman who left me a real mix of personal treasures. As a young adult she had spent a lot of time living in Paris and her war work had her based there doing things that she never talked about. However years later an American friend of hers told me that she had been involved with the Resistance, something my mother always refused to corroborate. There's nothing more alluring than mystery, don't you think?

Now this picture below is not my mum. She was far prettier than this lady here who is actually someone that most French people - and quite a few others as well - have heard of. It is a picture of Aurore Dupin who was better known as Georges Sand (1804 - 1876). There is so much written about her that I won't tell you very much here. I'll just tell you a few salient facts.

She was a writer and a feminist; if there had been paparazzi around in her time they would have been stationary outside her house snapping the rich and famous that clustered around her. She would sometimes dress as a man and had a string of lovers, both male and female. However, the love of her life was the composer Chopin. Trust me, if you stopped a French person in the street and asked them who George Sand was, they would know.

Now, you ask yourselves, what has this to do with my mother? Well, one of the things she left me (how glad am I that I don't have brothers and sisters) is a letter written by Georges Sand. As I grew up it was always in a frame in the corner of our living room and I took no interest in it. In fact it was only when I went through all my mother's possessions - about 13 years ago now - that I truly looked at this letter. Since I've been in France and have found out a lot more about French culture, and have also started studying times gone by, I now have an idea of just how famous George Sand is. So, I thought, I can sell this letter for vast sums and make a collector happy.

Well, wouldn't you know it. It turns out that this lady-about-town spent a vast amount of her time writing letters. Unless it is written to, or mentions, Chopin or somebody equally famous then the letter just has interest but no monetary value. There are hundreds of these letters out there. My letter, which is on monogrammed notepaper, is just chit-chat about a holiday, although her writing is hard to read. 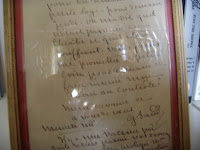 Oh well. It will be in my box of treasures for someone else to sort out one day.
Posted by French Fancy... at 7:27 am

This is absolutely fascinating! How did your mother come to have such a letter in her possession?

I'm so glad you found me through the black box! I'm adding you to my blogroll and will be back for a visit soon!

Unfortunately I have no idea how she came by it. She knew many interesting people and I wish she was alive today so that I could quiz her. There are always unasked and unanswered questions in life though. Oops, getting a bit too profound for a Monday afternoon there.

I enjoyed your blog as well and will definitely be back. Glad you liked mine.

Yes fasinating. It is sad to think that because of the internet there will be fewer letters around.

It's still pretty cool to own an original though, even if it won't make your fortune.

P.S. Just saw your comment on my post Nice Enough to Eat. I still think that Dr Strangely Strange song is great although I suspect their other songs are nowhere near as good (They are a sort of second-rate Incredible String Band). And the album introduced me to the tragic Nick Drake who is more popular than ever now. Time Has Told Me is a wonderful song and still makes me tingle every time I hear it.

casdok, It's a real treat to get a proper letter these days. I suppose in a hundred years time people will collect our utility bills because there will be no proper letters circulating.

Despite the letter's lack of financial value, it does have value - perhaps of a more valuable kind.

I can't determine from the photo but is the letter in acid-free containment? Archival glass and paper are worth the investment.

Dumdad, I'm not really a money-grubbing materialistic daugher on the make. But I was curious to see if it was worth anything.

Re the music, I have to say that I sometimes play my String Band cd's (yes, I had them on vinyl as well, if you're asking). I've got the three Nick Drakes (um, where to put the apostrophe?) and I adore River Man and Fly.

Bill, hello there. I think the letter is under a sheet of polythene under the glass and I suppose I should look into preserving it properly. Thanks for the tip.

How wonderful! I would have love to have met your mother and asked her how she came by the letter and why it meant so much to her.

There are always so many questions we want answered after they have gone. The times I wished my grandmother was still here.

Best wishes and thank you for dropping by.

I'm glad the black box found me...I think you are the first one to come via it! I love this story of your letter. It makes a great conversation piece even if it isn't of great monetary value! Your mom must have led a very adventure filled life!

Hello there French Fancy, thanks for the visit and I've thoroughly enjoyed my return visit, I'll be back. Blogthatmamax

Well you lucky so and so...have wonderful to have a letter writen by anyone famous!!!..I have a photo of Jimmy Connors at Wimbledon dies that count?

Don't know why I said it was covered with polythene; I meant of course cellophane or acetate. Must have watched Withnail and I too much

I must say the black box did its stuff. I looked at some lovely blogs and each one was a totally different style from the previous one.

so thanks again for coming back to me Annie, Nikki and Blog That Mama

Blu, did he sign it? At least you got to Wimbledon; for me it's only been a tv experience.

Wow, what an interesting post. Also how interesting to see how many of your readers I recognise from my travels around blogland. I still get a thrill when I recieve a handwritten letter in the post but never reciprocate as my handwriting is illegible; I type and print my letters in response.

djk - got any relatives who are doctors by any chance? Glad you popped in.

I appreciate that lots of money would be great, but what of the historical interest etc?

Mind you, I once thought I'd found a rare Beatles record among my mother's stuff. Time between me finding it & going to a record dealer = .2 seconds.

Sadly it was also worth bugger all.

Still, it's a wonderful curiosity to have, though I doubt in the same league.

Hi Chris. It wasn't one of the early White Albums, was it? I guess not else it would have been worth loads.

Am very touched that you came back for another read. You will be pleased to hear that things have much improved.

Maybe an idea to keep a few utility bills for posterity!

One can't watch Withnail and I too much.....

I have just spent ages going through some of your old posts...you have a fab blog!!!

Finding out that information about your Mum must have been amazing - Such a shame she didn't tell you more!!

I do have to tell you that I love the fact that your dogs get a cheese course and those boots are gorgeous (that is one thing I am looking forward to about going back to the UK...boots....god I love em!!)

Ps. Have added you to my blogroll :-)

Dumdad - Of course I don't think of it pronounced as 'polythene', it just has to be 'polythine'. One of my all time top three films. Jennifer 8 was on Film Four recently but we missed it unfortunately.I love Robinson's writing as well.

Carol - thanks for the compliments and good luck with your return. I'll be keeping my eye on your movements (oo er missus) and wait for blog reports.

I hope nobody thinks I'm doing individual replies to people in order that my comment count is bumped up. It's a real novelty to me to get a few comments and I think the Black Box widget is excellent-even though I ended up on one blog five times (anyone would think I had an essay to write)

Good day !.
You may , perhaps very interested to know how one can manage to receive high yields .
There is no need to invest much at first. You may start to get income with as small sum of money as 20-100 dollars.

AimTrust is what you need
AimTrust represents an offshore structure with advanced asset management technologies in production and delivery of pipes for oil and gas.

Its head office is in Panama with structures everywhere: In USA, Canada, Cyprus.
Do you want to become an affluent person?
That`s your chance That`s what you really need!

I`m happy and lucky, I started to take up income with the help of this company,
and I invite you to do the same. It`s all about how to select a correct companion who uses your funds in a right way - that`s the AimTrust!.
I earn US$2,000 per day, and my first investment was 500 dollars only!
It`s easy to join , just click this link http://yjohosiduk.angelcities.com/fehaqe.html
and lucky you`re! Let`s take our chance together to feel the smell of real money

French Fancy...
Having spent seven years living in France I have now returned to the UK. My partner and I have separated and after about 30 years working in theatres and offices, I have now begun work as a carer in a very plush retirement home. I'm sure I will have lots to moan about here.