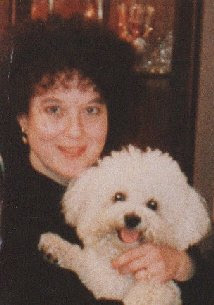 this is me about 12 years ago with my first ever bichon - sadly now buried under the apple tree outside our old UK house.
Posted by French Fancy... at 6:09 pm

Beautiful, and so was the dog.
The pain of losing a beloved dog is just dreadful, kindred spirits, my first ever dog is also buried under a tree in our old UK house, still miss him.

Hello Ann, didn't notice you had crept in here. I never wanted to have more dogs after the sorrow from Toto. Mr FF persuaded me to get another bichon - Misty - and then Poppy the rescue kind of happened to us. If we hadn't taken her she would have been PTS

Oh thank goodness you replied FF, I have been sitting here waiting all this time, believe I have chair sores.

I never wanted another dog when I lost my first dog Innocent, Mr Ann went out and bought Ziggy, 7 weeks after our loss, a most beautiful Bull Terrier, took me a year to love him, I cared for him, walked him, played with him, fed him, but never loved him, my heart was still with Inny.

One day I fell in love with him, aged two he became an epileptic, a very serious one, about 8 seizures a month, that was okay, we loved him, we coped, he had many ailments over the years, he became diabetic, then eventually a large cancerous tumour was found on his liver, the operation was a great success, we brought him home, then the diabetes kicked in, it would not regulate, he died 8 days later in our arms, my heart died with him FF, I would go down town, screaming in the car, I was in so much pain at his loss, five months later Mr Ann saw Tommy online, and fell in love with him, I did not want another dog, Mr Ann went on and on, I finally gave in, Tommy came to us at 8 weeks old, I grew to love him, he was two last week, then we got Charlie 4 months after Tommy, he was two years old, they both love each other.

Ziggy was a magnificent dog, his grandfather had won crufts, he was head and shoulders above any Bull Terrier, so intelligent, so gentle, everybody loved him, everybody still asks about him, he would sit in the car patiently waiting for me when I went down town, people would say you should show him, told them I wanted a dog to be a dog, not to be put into a circus ring, out of all that beauty, came some terrible illness's, it was a privilege to be owned by Zig, I would never have given up one second of the 10 years we had with our beloved boy.
I understand you pain at losing ToTo, it is quite dreadful, isn't it FF.

Hello again my dear friend - Ziggy sounds the most fabulous dog in the world - you must have been so very heartbroken when the time came.

So it is down to our men that we have elected to put ourselves through this potential heartbreak once again.

I totally agree with you about the showing aspect. I originally got Toto with a view to showing him. His mother - Crackling Rosie had been best of breed but, once I went to a few shows to get the feel of them, I went right off it. Plus the fact that I didn't want to break his will to make him do all the show stuff.

I met some Bichons a few years ago. Friends of my sister was a breeder. I thought then that they were absolutely delightful - my husband though - he thinks not... One day, maybe, I will have a perfect little Bichon to call my own. I think they are absolutely adoreable.

Hello Trish, how nice to see you here. Bichons are simply lovely and for people with pet allergies they are ideal - they don't shed at all. Ignore hubby - after all you will be the one looking after it and I'm sure that the playful ways your bichon will have are sure to win hubby round.

French Fancy...
Having spent seven years living in France I have now returned to the UK. My partner and I have separated and after about 30 years working in theatres and offices, I have now begun work as a carer in a very plush retirement home. I'm sure I will have lots to moan about here.